Spice up your party or event with some Mexican mariachi flair!

A jazzy mix of classic and modern hits by a professional quartet!

Bring your guests to a different atmosphere - jump into the past, as in travel through time?

As a full band or a trio, these classy musicians provide great entertainment

Live band for your Octoberfest

Do you want a good cover band during your Octoberfest? Want to sing and dance? Or are you looking for a Real Dixieland orchestra? Evenses offers the best bands for your Octoberfest.

Looking for musical entertainment for your own Octoberfest? Or would you like to be advised in the various options that we have available for you very own Octoberfest? View our options page or contact us.

Octoberfest is the time of year when you can unabashedly walk around in your schlager suit all day long. With a beer mug in one hand and a bratwurst in the other, without looking mad. Organise your own Octoberfest together with Evenses!

Before moving on to Octoberfest as we know it today, let's take a look at its origins. How did this tradition originate and how has it developed over the years?

You might not think it, but today's Octoberfest originally started out as a horse race. In 1810 Crown Prince Louis of Bavaria married Princess Theresa of Saxe-Hildburghausen. The wedding party lasted a total of 5 days and in honour of the marriage a horse race took place in the Wiesn (meadow). Everyone in Bavaria and the surrounding area agreed; this should become an annual festivity. In 1819, the city of Munich decided to take the event into its own hands and ensure that it could continue to be celebrated annually. 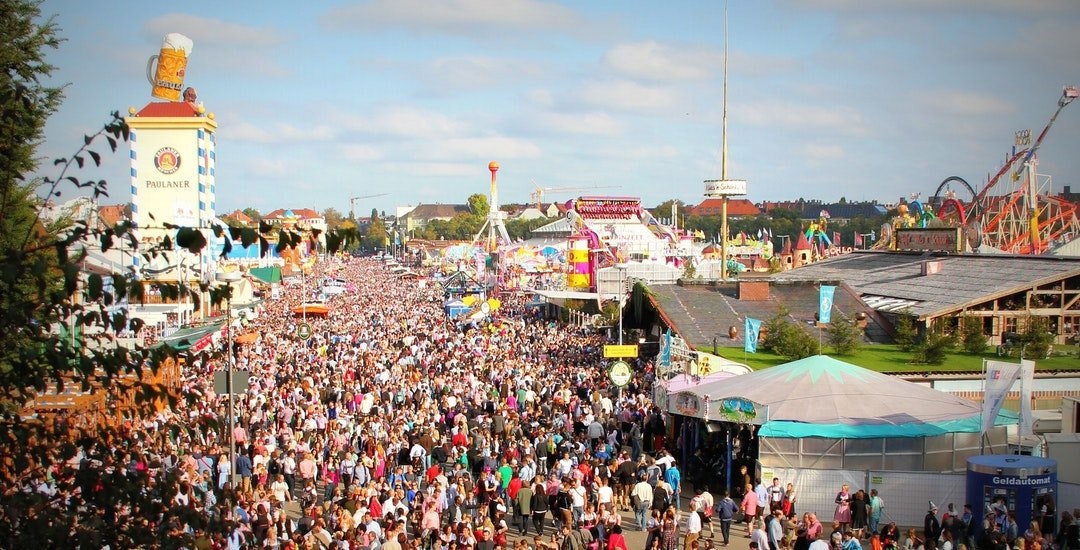 According to tradition, the Octoberfest as we know it now always starts on the first Saturday after September 15 at 12:00 and ends on the first Sunday in October. The festival lasts about 16 days.

Why does Octoberfest start in September? That answer is simple, it the weather conditions are better and the September nights are warmer. This gives visitors more time to enjoy the beer gardens outside the tents for longer. Visitors can also take a walk on the Wiesn in the evening.

Octoberfests are organized all over Germany, but Oktoberfest Munich is the largest folk festival in the world. At 12:00 precisely, the first barrel of beer is connected and the mayor of Munich taps the first beer. With the words "O'zapft is", which means "it's tapped", the Octoberfest is officially opened.

There are more than 14 large tents on the Wiesn, the festival site. Each tent has its own charms, atmosphere creating a name and identity for each one. Marstall is the first tent that can be seen on entering the site. In the evenings, the local band plays the Bavarian classics.

If you really want to party and dance, the Schottenhamel is the place to go. This tent is popular among young people. The tent is reserved for the student associations, in other words a success for a spectacular party. If you are more of a wine person, the Weinzelt is the place to go, fifteen different wines are served here.

Over the years, Octoberfest has also come to the UK. Every pub or big venue w3ill create their very own Octoberfest, offering beer in steins and bratwurst. some places will go all out and get tents, costumes, live German music and more! Look out for one this October.

Now that the origins of the party are a bit clearer, let's now look at the Octoberfest as everyone knows it and specifically the largest and most famous; Octoberfest Munich. The Octoberfest 2019 had more than 6.3 million visitors and more than 7.5 million litres of beer were drunk.

The festival itself consists of a funfair rides and of course the beautifully decorated tents should not be missing. You can get beer in and around thesetents. The special thing about this beer is that it is traditionally served in a stein. A stein is a beer mug with a capacity of one litre. The beer that is served is not just any beer. It is in fact laid down by law that only a few beer brewers from Munich may tap their beer. Being able to tap the beer is of paramount importance for an Octoberfest. 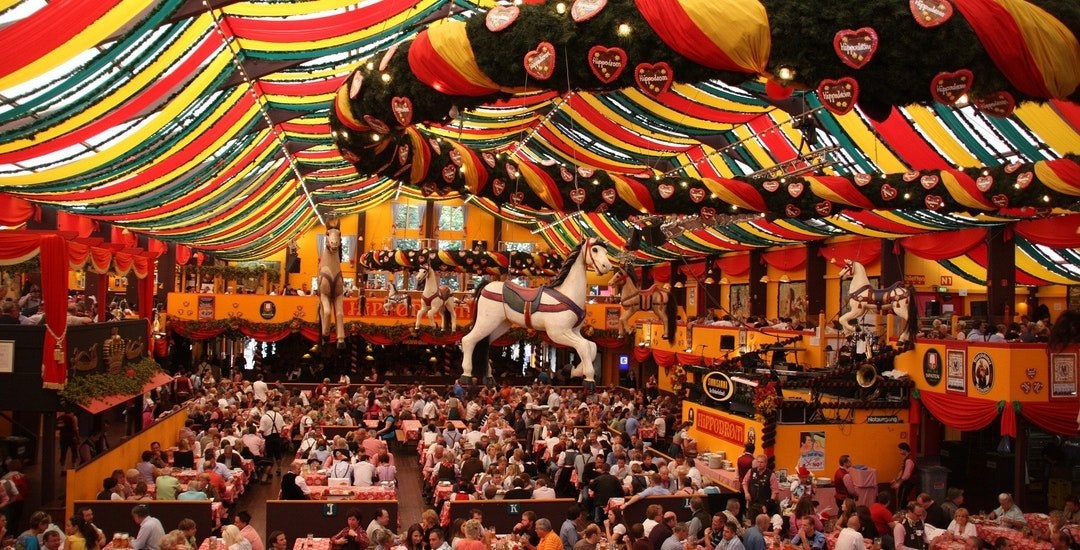 Of course, a nice big party should include music. When you visit a beer tent on the Wiesn, a live band will perform on a raised stage in the middle of the audience. Entirely in theme, the men in lederhosen and the women in dirndl, the bands play German and international music. The song that really comes back several times a day is Ein Prosit.

The music heard during Oktoberfest is sometimes called hoempapa music. This type of music is played by hoempapa bands with brass instruments and accordions.

The stages at the Octoberfest are usually taken by artists who play German music in addition to an international repertoire. Thus, each year Wiesn hit of the year is chosen. Helene Fischer with Atemlos durch die nacht and Josh with Cordula Grun, among others, have already been named Wiesn hit of the year.

Are you still looking for an artist who will provide your Octoberfest with the best hits and sing-alongs? At Evenses we have a wide range of great artists including Wilfried Wildschwein. A singer who not only sings the best hits but also has released his own songs. Also German Schlager singer Gunter can make you feel like you are in Munich.

Are you looking more for a band, then there are also many possibilities. Almost all the bands on our site have German Wiesn hits in their repertoire. If you really want to make an English Octoberfest with English music then take a look at our extensive range of options. Ensuring that everyone is not only dancing, but all known Dutch hits are also sung along at the top of their lungs.

After reading the text, do you feel like creating your own Octoberfest? But it's still so far away or you don't feel like traveling all the way to Munich. Then you can of course choose to organise an Octoberfest yourself. We from Evenses can help you with that.

The theme is known, now you need a suitable location. The location of course depends on the size of the party. Do you want to keep it nice and cozy or do you want to make it big? Are you looking for a location or will you rent a large tent, everything is possible.

The decoration is perhaps even more important. To give it a real Octoberfest twist, the beer benches and beer mugs must not be missing. The best part is that everyone comes in Octoberfest attire as well. The men wear traditional lederhosen and the women come in a dirndl.

When the location is ready and the decorations are in place, the music can't be left out. A DJ is an easy way to fill in the evening. If you want to give an extra twist to the DJ, then Dj and singer is a good option. This artist not only plays the best hits, but also sings the best sing-alongs. A combination of a DJ and live singing.

We have already mentioned artists like Wilfried Wildschwein and Schlager singer Gunter, but our Marcelino lookalike should certainly not be missing in this list. Marcelino turns everything upside down for half an hour.

Octoberfest's are not just about drinking beer but also about the many activities surrounding a real Octoberfest. Activities such as nail bashing and jumping jacks are also a must during the party. Not only fun for the kids, but also a great activity for the adults.

Now that all this is settled, there is only one thing left: beer, lots of beer, and stock up on beer mugs. But let's not forget the wine and non-alcoholic drinks.

Would you like us to help you organise a real Octoberfest and do you want to find out which artists are best suited to the event and to your budget? Then contact us without obligation. We are available seven days a week for your questions. 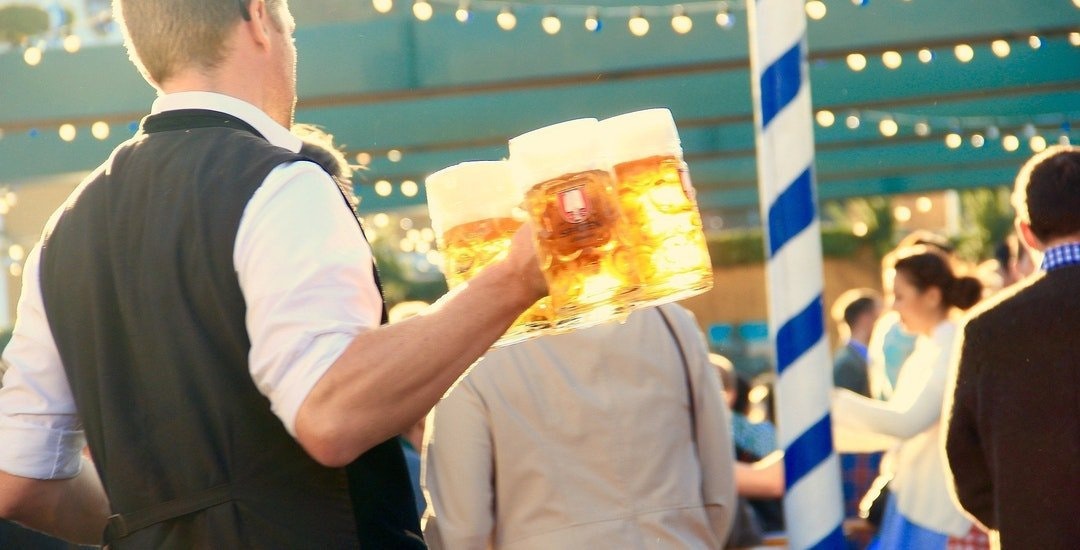