The New Rhythm Brass Band is a swinging band that knows how to make every event a success!

Brass band New Rhythm consists of 4 drummers, 2 horns and 3 female dancers and can be used for many types of occasions. They can cruise the neighbourhood or provide an opening for big events. The brass band has played in this formation throughout the UK and abroad, in countries such as Belgium, Germany and France, since 2009. Would you like to hire the New Rhythm brass band for your business party, wedding or event? This act can be hired at Evenses. Fill out the offer form or contact us with no obligation. We’ll be ready 7 days a week to answer any of your questions.

Are you getting married in a few months and are you still looking for a band to complete the party?
Perhaps, you are going to give a backyard party for friends and family this summer, and you're thinking about booking some more entertainment for the occasion... Or are you part of the organizing committee of the annual neighborhood festival and would like to make it a special spectacle this year? 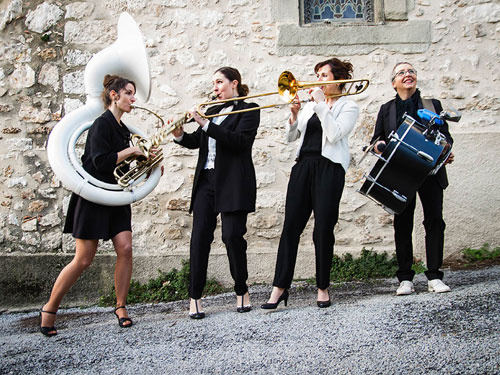 The concept of brass band is actually quite broad. There is a lot of variation within the genre, depending on the origin of the rhythms, the instruments used, and the type of music that is played there. For example, a traditional British brass band differs from an authentic Balkan brass band in various ways. We will elaborate on this later, but if you are considering booking a brass band, you can be sure that you will have a lot of options and combinations to choose from.

Despite the wide range of brass bands at the local level, booking a brass band for your party or event does not have to be difficult. Given the varied choice, it is advisable to request the help of a party who has experience in the field of party planning and similar booking requests when booking a brass band. As mentioned before, one brass band is not like the other.** At Evenses**, we have an extensive range of professional brass bands that we have already booked for multiple occasions and events. These requests sometimes even include additional entertainment, such as a fire show or dancers, to really make it complete. We are happy to make that expertise available to you so you can book the perfect brass band for the event that you are going to organize.

You can reach our event specialists seven days a week, both via the quotation form on our website and by e-mail or telephone. If you first want to take a look yourself, you can use the search engine on our website to take a look at all the brass bands in our portfolio. In addition, to help you a little further, we will tell you more about what a brass band is below.

What is a brass band anyway?

As we wrote earlier, there is a lot of variation in the field of brass bands. In principle, this suits you as the organizer of an event, because the more choice you have the greater chance that there will be a band that fits your idea. However, it can feel a bit overwhelming, especially if you've never booked a large big band before. For that reason we will list a few types of brass band below. The brass band is originally British, but over the centuries there have been variations in various places in the world.

Brass bands in the Low Countries

Brass bands are the type of band that often occurs around the UK, but they often also exist in many other countries, including France, Switzerland, Netherlands, and Portugal. A fanfare is a musical ensemble that consists of brass instruments, percussion (drums and the like), and saxophones. When you think of a fanfare, you probably think of a large orchestra moving through the streets on special occasions, and that still happens today, but there are also fanfares that have become full-fledged concert orchestras. In the UK alone, there is nearly more than two thousand brass bands.

The British brass band style is possibly the oldest variation in the world, which was founded in 1809. A traditional British brass band consists of 27 to 29 brass and percussionists, including nine cornets, four tubas, and three alto horns. This type of brass band is the type that is most prevalent in the UK, Australia, and New Zealand, while there are also countless British brass bands in continental Europe, Japan, and North America. The brass band is a real tradition in the UK, resulting in the many different local communities and schools with brass bands in the country. There are also competitions throughout the year, at local, regional, and national levels, with promotions and relegations between the various national divisions at the end of each year.

Balkan brass bands, often known under the Serbian name Truba (which means trumpet in Serbian), is a separate form of brass band music that comes from the Balkan region. It is the result of a merger between military music and folk music from that region. In recent years, the genre has also become popular as an element of European and American electronic music. The well-known Serbian filmmaker Emir Kusturica has also made the Balkan brass band style popular in the international community outside the Balkan region through several of his films, including "Black Cat, White Cat". These bands consist of a large number of musicians playing brass instruments, including trumpets, euphoniums, and sometimes trombones. The percussion comes from small drums and bass drums. The largest brass band event in the world, the Guča Trumpet Festival, is a five-day festival that brings over 300,000 visitors to the Serbian village of Guča every year.

Another region with a very rich and special brass band tradition is the American city of New Orleans, in the state of Louisiana. At the end of the nineteenth century a form of brass band started to emerge that combined elements of European military music and African folk music. This type of brass band would eventually form an important part of the basis for the development of the earliest jazz and dixieland music. Like the other forms of brass band music, the ensembles of the New Orleans style mainly consist of brass wind instruments, including trumpets, trombones, and saxophones.

Thanks to the interest of folk and cultural elements within the brass band tradition, unique forms of brass band music have emerged all over the world since the nineteenth century. For example, the Royal Hawaii Band, founded by King Kamehameha III in 1836, is the third-oldest brass band in the United States, and the only full-time municipal band. On the Tanzanian island of Zanzibar, beni is a unique form of brass band that is particularly popular during local wedding ceremonies. This style first developed at the end of the twentieth century to ridicule the colonial military bands of that time, but over the years it has become an important part of local and musical culture. In short, there are brass bands in all shapes and formations, and it is certainly a good idea to familiarize yourself a bit with what kind of brass band music would suit the occasion best. 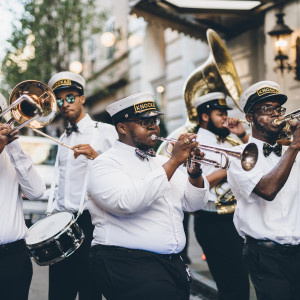 What Evenses can do for you

Booking a brass band does not have to be difficult if you already know more or less what kind of event you are going to organize and what role the band will play. Not every professional brass band will fit the type of party or event that you are organizing, so it is certainly useful to have a reasonably clear idea of what you want before you start looking for a brass band.

Want to rent a brass band? Our brass bands make every company party, village party, event, and wedding a big party! A swinging brass band is a great act for your party, festival, event and opening ceremony. The brass bands consist exclusively of professional musicians, personally selected by Evenses. The brass bands can be booked for various occasions and ready to perform at their best.

Thanks to the swinging drum lines with a Caribbean twist, our brass bands are a guarantee for an entertaining performance. Our brass bands have been providing entertainment for young and old for years. A brass band is very interactive because they can walk through the hall or street. In addition, they can of course also play on a stage. Our brass bands can be booked in various formations. The standard option is a brass band consisting of drummers and wind players.

At Evenses, we always offer you an all-in package. This means that there will be no unexpected costs that are charged afterwards. Consider, for example, travel costs and costs of all the equipment. With Evenses this is all included in our official proposal. Everything is arranged to perfection. You can contact us seven days a week, by email or phone for help in booking a brass band!

Book brass band for your city party, festival, or birthday